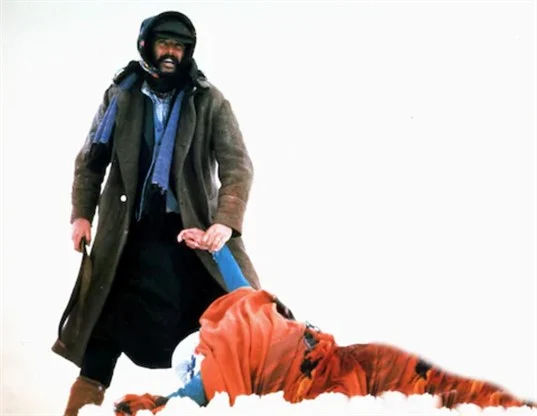 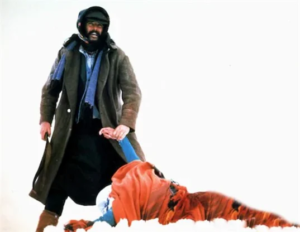 Yol and ‘Kurdistan’ as Supplement: The Space of Kurdish Cinema
Yol was a turning point in cinema in Turkey in terms of its conﬁguration of cinematic space. The ﬁlm not only produced an uncompromising critique of the repressive state apparatuses within the Kurdish region in Turkey, but also diverged from the national cartography of cinematic space for the ﬁrst time by introducing ‘Kurdistan’ as a new cinematic space. The ﬁlm follows ﬁve prison inmates en route to their hometowns in the Kurdish region during a national holiday break. As they travel through the national landscape, the ﬁlm shows the road signs of the cities they pass.
Finally, when the bus is driving one of the inmates, Ömer, through the city of Urfa, located at the western border of the Kurdish region, we see the inter-title ‘Kurdistan,’ superimposed upon the landscape. The Kurdistan ‘sign’ was added by Yılmaz Güney during the editing process in Europe,6 but was excised from the versions released in Turkey.7 Güney’s cinemato-graphing of the political space redraws the map of the region where the ﬁlm takes place in accordance with Ömer’s politico-cognitive attachment. This authorial supplement refers, for the ﬁrst time, to a discrepancy between the national cartography and cinematic space.
The new cartography, however, does not work out in Ömer’s favour. His happy and excited face when he gets off the bus and steps into the middle of a vast landscape quickly turns to fear as he gets closer to his village, where the sound of automated machine guns becomes audible. The nearer he gets to his village, the more frequently the gunshots explode.
This short-lived excitement and sense of freedom disappear as he reaches the outskirts of his village, which, as he soon ﬁgures out, is surrounded by the gendarmerie in search of smugglers. Ömer could enter the village only after all smugglers surrender after a ﬁerce shootout. The operation against the smugglers on the mountains continues the entire night. The next day, the gendarmerie brings the dead bodies of the smugglers for identiﬁcation; although Ömer’s brother is among them, he cannot yet claim the body for fear of retaliation. In the end, he is seen riding his horse along with other smugglers to the mountains outside the village.
Though Yol has been frequently commented upon by critics and scholars, the part where Güney inserted the sign ‘Kurdistan’, has been missed – or skipped – within these comments. This lack of scholarly attention may be partly due to the excision of the part in the ‘Turkish’ version, yet in the few comments that do refer to it, it is dismissed as being not part of the original ﬁlm but added as an afterthought by Güney. But if a ﬁlm is ﬁnalised during the editing process, when all its parts are assembled, the dichotomy between what constitutes original and what addition becomes problematic. We can even argue that, since the ﬁlm was only supervised by Güney from prison and was directed by his assistant, the ‘addition’ is Güney’s only directorial imprint.
Yet in discrediting the ‘addition’, there is more at stake than the ﬁlm and its truth-value. What makes the sign inferior to, and less original than, the rest of the ﬁlm, is the preconviction of the commenter on what he considers original: the national territory. We can make sense of this hierarchy of original/addition within the cartography of the ﬁlm (the very position of the extra footage, the ‘excess’ within ‘the reel’) only in connection with the national cartography (the truthvalue of its map and Kurdistan as ‘addition’): the belief in the national territory and the disbelief in what the sign refers to – Kurdistan. The ‘real’ cartography here determines the limit of cinematic space.
There is also the itinerary of the ﬁlm’s completion process. In order to ﬁnish the ﬁlm, Güney ﬂed Turkey to Switzerland where he was ‘present’ during the editing process. His absence from Turkey made the completion of the ﬁlm possible. However, to understand this arbitrary original vs. addition debate, one can claim from the perspective of Derrida that the sign works as the “supplement” to national cartography as ‘presence’.
In discussing Jean-Jacques Rousseau’s work on ‘writing’ as a destruction of the presence constituted in speech, Derrida employs Rousseau’s oft-used term ‘supplement’ to deconstruct this and other dichotomies of absence and presence (original and addition) in his texts through recourse to its double meaning as a.) an addition to something already complete and b.) as substituting a lack, thereby completing what is already claimed as complete.
Kurdistan as ‘sign’ within the ﬁlm’s cartography and Kurdistan as geography, taken as ‘supplement’ or “exterior addition” (p. 145), may be regarded as serving to give completion – only in the sense of providing the complete picture of what constitutes ‘national territory’ as presence. While the ﬁlm was shown ‘outside’ Turkey, and Güney received the Cannes award for it in France, it was banned – absent – in Turkey until the late 1990s. When it was ﬁnally shown in Turkey, the absence of the sign further revealed the complicity of the geography of exhibition and its cartographic determinants, as well as the geography of the ﬁlm. 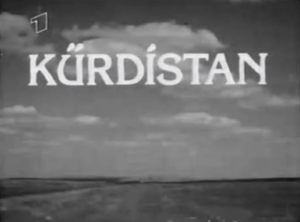 Our purpose is to build solutions that remove barriers preventing people from doing their best work.

No products in the cart.

Select the fields to be shown. Others will be hidden. Drag and drop to rearrange the order.
Click outside to hide the compare bar
Compare
Wishlist 0
Open wishlist page Continue shopping